The Museum strives to impact this generation by leading people to encounter Jesus Christ in worship through music.  Born out of the local church and guided by the call in Micah 6:8 to act justly, love mercy and walk humbly with our God, The Museum’s latest project, ‘What We Stand For’ is a statement about what Christians should stand for, rather than simply rally against.  We continually see many people divided around what the Church is against, but we long to be people who are known not only for what we are against, but what we as the church stand FOR.

As Christ followers and musicians we want to craft songs and lead worship experiences that inspire people to live a life of worship.  Our hope is that our worship would never be confined to the walls of a church, but would lead us to serve the world around us and love people in the way Christ has called us to.

We are a team of worship leaders, musicians and artists that desire to share the love of Jesus on or off a stage. 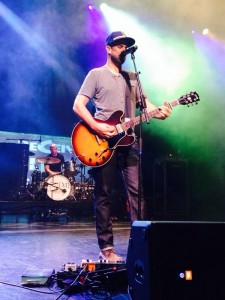 Ben started The Museum in 2008… He has spent the last seven years touring and spearheaded the creation of four studio albums as The Museum.  When he is not on the road, Ben resides in Woodstock, GA with his wife Mary Grace and their daughters Eisley (born in 2013) & Lenna (born in 2015).  In his spare time, he enjoys playing basketball and loves playing or watching most sports.  His lifelong favorite teams are the Dallas Cowboys, LA Dodgers & LA Lakers.   Ben was born in Albuquerque, NM, graduated from Baylor University in Waco, TX,  and still feels like Texas is home although he has lived in Georgia since 2006.   He spends a good amount of time on his grill and doing woodworking or projects around the house.  He enjoys a good backyard fire and spending time with family and friends.   Ben is an avid New Era 59fifty baseball hat collector and has partnered visiting baseball stadiums with collecting team hats.

Ben got his start leading worship in High School in San Antonio, TX and spent his college years growing and learning as a worship leader with a local ministry at Baylor.  In addition to devoting his time to The Museum, Ben has maintained an active role with the worship ministry at Briarlake Church since 2008 and continues to work with local Churches in developing a healthy worship ministry.  Beginning in 2015 Ben has partnered with church plant Sojourn Woodstock to help lead and develop a community of worship and advance the gospel in their hometown.

After beginning in 2008, The Museum garnered national and international attention alike as their debut album “Let Love Win” released in July of 2010. The successful debut landed at #7 on the Billboard Heatseekers chart and quickly showed the band was here to stay.   On the heels of two highly successful top 10 singles in  “My Help Comes From the Lord”  and “Allelujah” the band launched a busy tour schedule that has seen them play over 600 dates in the first five years of existence.

The bands newest album, ‘What We Stand For’, released in May of 2014.  Underscoring the heartbeat of how they hope to use their platform as The Museum, the title track effectively sets the declarative tone for What We Stand For.  The albums second track titled “Always Yes” is a bit of a change of pace for the band.  “Sometimes we just take ourselves a little too seriously, and ‘Always Yes’ is a fun celebration song that’s about opening up our hearts and saying this is who God is, He’s faithful.   So we’re singing about opening our lives to say ‘yes’ and running after Him,” says Ben.  “I hope it’s something we can really begin to embrace in our singing, that we can let go and have a good time while we worship and celebrate who God is.”

With “Carry My Heart” the songwriting takes a decidedly personal turn. When the band first started, Ben says they were all single guys driving around the country playing music. In the course of five years, things have changed dramatically as everyone began getting married and starting families.  For Ben and his wife, and drummer Josh and his wife, there have been heartbreaks along the way. For Ben and his wife, now parents of a young daughter, the first pregnancy prior to that, ended in a miscarriage. And for Josh and his wife, they’ve been trying to have kids for three years and had been unable to conceive. In the midst of these struggles, Josh brought an idea for a song to Ben with a chorus that said, “Carry my heart, Lord/Carry my heart/When my whole world falls apart/Lord, carry my heart.”  “There was just something really simple and immediate about it, something we both really needed,” Ben shares. “We had both walked through tough seasons, and Josh and his wife struggling and feeling like they weren’t able to be in control of their situation. We sat down and wrote this song together and just really loved the honesty and message.”  With the verses taken almost straight out of Psalm 139, it was a wonderful reminder to the band that no matter how helpless they feel, God is still present.  “He is in control, and there is hope and joy even in our suffering as we continue to keep our eyes fixed on Him.”

Click here for Promo Pictures available for Events with The Museum